In the seasonally-adjusted series, FGV’s GDP Monitor signals a growth of 0.3% in the economic activity in the second quarter, compared to the first quarter. This is the sixth consecutive positive rate in this comparison. In the monthly variation, the growth in June reached 3.3%, compared to a 2.6% drop in May. Year-over-year, economic activity grew by 1.2% in the second quarter and by 2.4% in June.

“The positive growth of 0.3% in the second-quarter GDP indicates that the negative economic effects of the truck drivers’ strike in May were largely rolled back in June. Despite the quarter ending with downturns across major segments, such as industry, gross fixed capital formation and exports, there was growth in agriculture, services and household consumption, keeping the economy in its path of slow recovery”, said Claudio Considera, Coordinator of FGV’s GDP Monitor.

In the year-over-year comparison, economic activity grew by 1.2% in the second quarter. On the supply side, despite the negative variations in mineral extraction (-0.6%), construction (-0.5%) and information services, these results indicate an improvement compared to previous quarters . On the demand side, only exports retracted, down 2.9%. 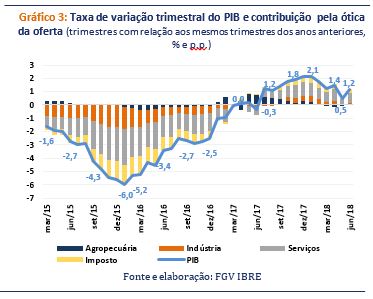 Household consumption rose 1.8% in the second quarter, year-over-year, indicating a decreasing trend after growing 3.1% in the moving quarter that ended in April. This positive result had a strong contribution from the consumption of durable goods (1.0 p.p.). 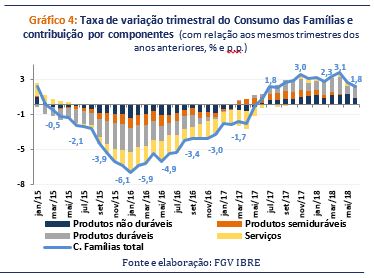 Gross physical capital formation (GPCF) grew by 4.1% in the second quarter, in the year-over-year comparison, offsetting the drop caused by the strike in May. All components have improved their contributions in the second quarter compared to the results published in the moving quarter that ended in May – even construction, which is still negative, recorded the best rate (-1.0%) since may 2014 (-0.9%). 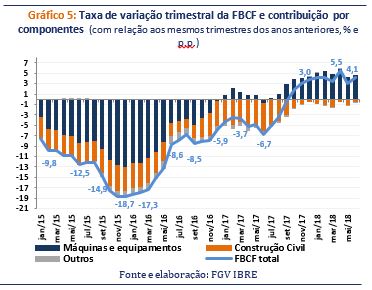 FGV’s GDP Monitor makes monthly estimates of the Brazilian GDP in volume and value. The purpose of its creation was to provide society with a monthly GDP indicator, based on the same methodology of IBGE’s National Accounts. Its series starts in 2000 and incorporates all available information of IBGE’s National Accounts (Tables of Resources and Uses, until 2015, last year of publication), as well as the information of IBGE’s PIB-Tri, until the last quarter released (first quarter of 2018).