Fundação Getulio Vargas was rated the world’s third most important think tank, up two places from last year, in the latest Global Go To Think Tank Index Report, which has just been published by the University of Pennsylvania. FGV competed against more than 11,000 peers in a vote by almost 4,000 specialists on five continents, including academics, business people and public officials. For the 12th consecutive year, FGV was rated the most influential institution in Latin America and for the fifth consecutive year it was rated the world’s best administered think tank. Twelve years ago, when FGV first featured in the ranking (which has existed for 13 years), it was ranked 27th in the world.

According to FGV’s international director, Marlos Lima, this achievement represents recognition by the international community of FGV’s influence in Brazil and around the world, as well as its capacity to propose solutions to global problems. “This is the result of decades of work and it shows that FGV is now an active player on the international stage. It is a clear sign that FGV has been participating ever more in decisions that are made in Brazil and abroad, through its analysis and recommendations. It is clear that FGV’s applied research is technically consistent and assertive, yielding excellent results for Brazil and the whole planet,” Lima says. 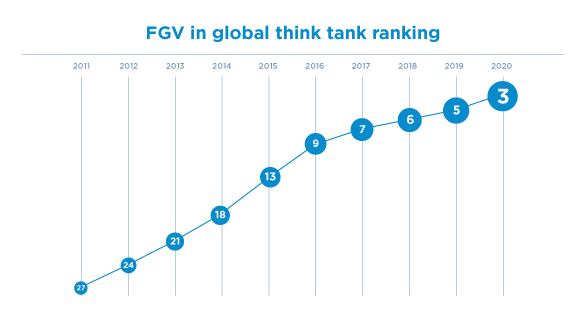 In an atypical year like 2020, in which the world was surprised by a pandemic, Lima says that FGV’s agility to adapt to new adverse conditions helped it climb two positions, in a show of remarkable vigor and tenacity. One of the categories, which was not ranked, arose from the health crisis and FGV was awarded “merit” in it. The institution was named as among the think tanks that had the best COVID-19 policies and institutional responses.

“Another rare quality observed at FGV is its multidisciplinary character in dealing with complex problems. It looks at issues from different angles, in terms of politics, economics, management, law and other subjects, while also counting on artificial intelligence techniques. This is unusual in the world,” Lima adds.

FGV stands out in various categories

FGV also stood out in various other categories in the ranking. In 10 of them, it was rated among the planet’s 10 best think tanks. It was rated the third best regional study center, the fourth best think tank for social policy, the sixth best for multidisciplinary research, and the 10th best in two categories: biggest impact on public policy, and best think tank for international development. It was also ranked in various positions in 10 other categories in the ranking, which was compiled by the Think Tanks and Civil Societies Program (TTCSP) at the University of Pennsylvania.

What are think tanks?

Think tanks are organizations that bridge the gap between applied knowledge and public policy. They are institutions that carry out research based on evidence and promote the engagement of specialists in the exchange of knowledge with the aim of informing the public and giving scientific evidence to decision makers who formulate and implement public policies.

You can find the complete report on the University of Pennsylvania’s website.