According to the study, published by FGV Social, there are currently 23.3 million people living below the poverty line in Brazil.
Public Policy
10 September 2018
Share

The study titled “What was the impact of the crisis on poverty and income distribution?”, published by FGV Social – Center for Social Policy, reveals that poverty and inequality have been rising up until the second quarter of 2018. According to the study, there are currently 23.3 million people living below the poverty line, with a monthly income of less than BRL 232 – approximately 11.2% of the population. Poverty rose 33% in the last four years. A total of 6.3 million people have joined the poverty ranks – more than the entire population of Paraguay.

Between late 2014 and June this year, the Gini coefficient rose at a rate 50% higher compared to its decreasing trend seen back in 2001, when inequality in Brazil was dropping, marking almost four consecutive years of a steady rise in income inequality. The last time this happened was during the downfall of the Cruzado Plan, between 1986 and 1989, which still holds the record for the highest inequality rate in Brazil,

according to Marcelo Neri, Director of FGV Social and the survey’s coordinator. The new Continuous Brazilian Household Sample Survey (Continuous PNAD) revealed a plunging average per capita income among employed workers between the peak in late 2014 and mid-2016, when the rate returned to the same levels of 2012. Since then, 40% of this average loss has been recovered. Social well-being, in turn, dropped 10.6% between 2014 and mid-2016, nearly falling back to 2012 levels once again. Unlike the average per capita income, however, well-being rates have remained stable since then. This means that there has not been any recovery – not even the slightest upturn – when it comes to the country’s overall well-being. The reason behind this apparent contradiction is that the progress in average income was offset by the rising inequality.

Inequality helps dig a deeper hole for recession, since poor citizens use up a bigger slice of their income. The increase in poverty was driven by the strong recession, which, in turn, is also fueled by higher inequality.  While everyone is struggling with lower income, this problem has taken its biggest toll amongst the poorest. Unemployment is the sole reason behind Brazilians’ lower job income.

The poverty rate has fallen back to the same level of 2011, virtually erasing all positive results reached throughout the decade. Constantly rising inequality translates into an even greater backtrack – inequality had not risen consecutively for more than three years in Brazil since 1989. Brazil’s worsened social performance also explains the underwhelming economy.

FGV Social has a long-lasting tradition of predicting trends in social indicators. The center is known for its efficiency in processing public microdata. It was the first team to identify the drop in poverty rates after the Real Plan. The center also predicted the upturn in poverty after the first year of the Lula administration and subsequent drops. Finally, FGV Social also revealed that Brazil reached the poverty reduction targets of UN’s Millennium Development Goals before the deadline.

Click on the image below to view the interactive timeline, available in Portuguese: 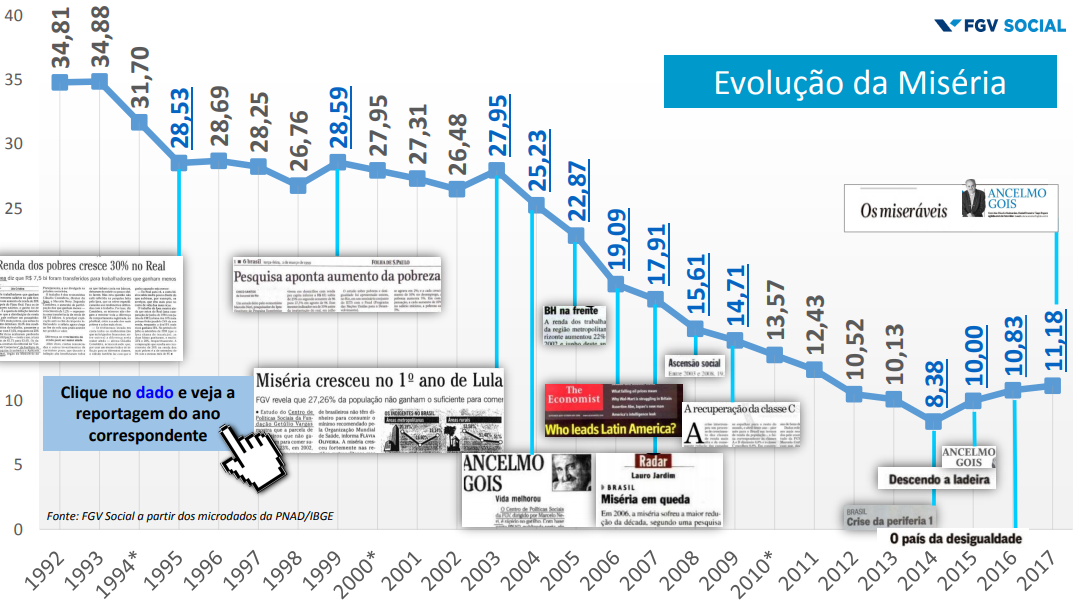