A study by Fundação Getulio Vargas’ Bioeconomy Knowledge and Innovation Observatory reveals that pastureland makes up 18.94% of Brazil’s area, covering around 160 million hectares. Approximately 52% of this expanse of pasture (roughly 89 million hectares) is degraded to some extent, especially in the Amazon and Cerrado savanna regions. To restore all this land would take approximately R$383.77 billion. However, the use of technologies for restoring degraded pastureland has the potential to generate revenues more than sufficient to pay back these outlays.

Source: Produced by FGV, based on data from MapBiomas.

The study’s results show that the costs of restoring and maintaining pasture differ not only in relation to geographic location and soil and climate conditions, but above all according to the level of degradation.

“One important aspect that will affect the choice of recovery strategy to be adopted is the respective pastureland’s level of degradation. As there are different levels of degradation, we need to have different levels of intervention for restoration to happen. For example, areas in the early stages of degradation require less intervention and lower operating costs in order to contain the reduction in productivity. On the other hand, if the degradation process is at an advanced stage, more intensive and costlier measures are necessary, as a high degree of degradation harms the ability to maintain the output and quality of fodder and its resistance to diseases, pests and invasive plants. Therefore, it is fundamental to define restoration or renovation strategies associated with the observed stage of degradation,” explains Sabrina de Matos Carlos, a researcher at FGV’s Bioeconomy Knowledge and Innovation Observatory.

Operating costs in the restoration, recovery and maintenance process are mainly incurred in the planting stage, heavily influenced by the use of fertilizers. In the case of severely degraded pasture, equipment costs are also significant. To restore all pasture areas that present some degree of degradation in Brazil, approximately R$383.77 billion would be needed. 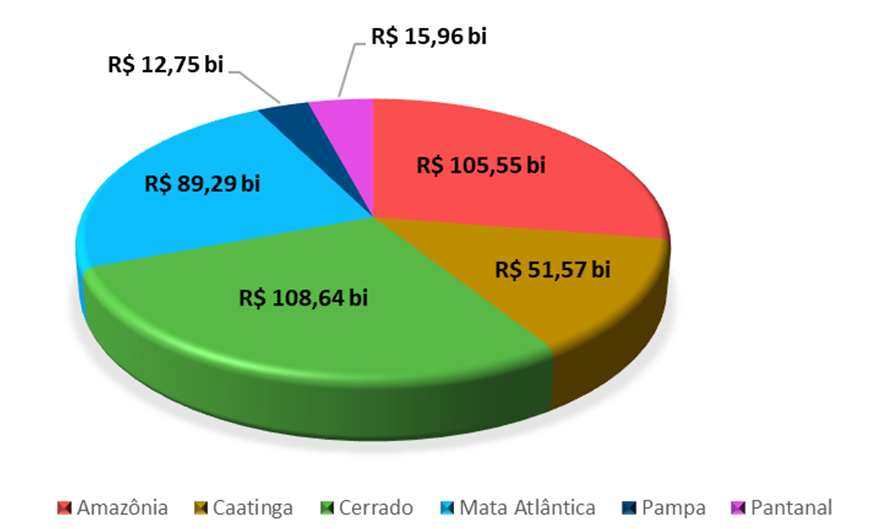 Looking at Brazil’s different regions, the Southeast has the lowest costs of implementing technologies to restore degraded pasture. This is strongly related to the fact that approximately 60% of degraded pasture areas in the region are located in the Atlantic Forest biome, in which fertilizer and lime prices are relatively lower.

The study also found that if Brazil were to achieve the goal defined in the Paris Agreement to restore 15 million hectares of degraded pasture by 2030, thereby reducing total net greenhouse gas emissions, it would be necessary to invest approximately R$21.17 billion. The highest costs would be in the states of Sao Paulo, Pernambuco and Ceará. In current circumstances, this restoration work would generate revenue of R$36.77 billion, thus yielding a surplus of R$15.60 billion. Considering a less optimistic scenario, the revenue would be R$21.75 billion, significantly lower than that obtained in present conditions, but there would still be a positive return of R$581.25 million from the adoption of restoration technologies.

In order to implement the Brazilian government’s ABC+ Plan, which aims to restore 30 million hectares of degraded pastureland between 2020 and 2030, approximately R$42.51 billion would have to be spent in 22 states and the Federal District. In this case, the highest restoration costs would be incurred in the states of Tocantins, Sao Paulo, Pernambuco and, above all, Goiás and Rondônia (in which approximately R$11 billion would be invested). “These results underline how little the government has been allocating to the restoration of degraded pastureland. This year, the ABC+ Plan only accounted for 2% of total government spending on agriculture. In 2023, the proportion assigned will be even lower, 1.8%. As voluntary carbon markets evolve, the restoration of pasture has great potential to generate income for cattle ranchers,” says Eduardo Assad, a researcher at Fundação Getulio Vargas’ Bioeconomy Knowledge and Innovation Observatory.

In present circumstances, restoring 30 million hectares could potentially generate revenue of R$75.55 billion, resulting in a profit of R$33.04 billion. In less favorable scenario, there would be revenue of R$44.69 billion and a surplus of R$2.18 billion.

The study indicates that implementing technologies to restore between 15 and 30 million hectares of degraded pasture has the potential to generate more than enough revenue to offset the costs incurred. Therefore, given the positive environmental externalities and economic benefits that recovered pasture can provide, technologies for restoring degraded pasture can be an effective and viable instrument to boost the decarbonization of the livestock sector.

You can see the complete study here.

END_OF_DOCUMENT_TOKEN_TO_BE_REPLACED

Our website collects information from your device and your browsing and uses technologies such as cookies to store it and enable features, including: improve the technical functioning of the pages, measure the website's audience and offer relevant products and services through personalized ads. For more information about this Portal, access our Cookie Notice and our Privacy Notice.